The Little Book of the Icelanders in the Old Days 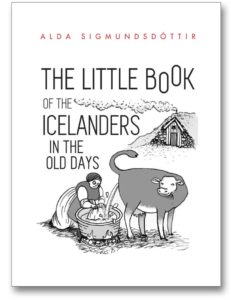 Iceland in centuries past was a formidable place to live. Situated in the North Atlantic Ocean, on the edge of the inhabitable world, the nation was both isolated and abjectly poor. Centuries of colonisation translated into oppression and subjugation from the colonial overlords, and a hostile climate and repeated natural disasters meant that mere survival was a challenge to even the hardiest of souls. In these 50 miniature essays, Alda Sigmundsdóttir writes about the Icelanders in centuries past in a light and humourous way, yet never without admiration and respect for the resilience and strength they showed in coping with conditions of adversity that are barely imaginable today.

What you will read about in this book:

The book is illustrated by Megan Herbert. Please note that the eBooks are not illustrated.

The Little Book of the Icelanders in the Old Days is also available in French and German.

The Little Book of the Icelanders in the Old Days is great. It’s informative without being dry, thought-provoking without being pedantic, and droll without being buffoon-esque. The writing is sharp and clear, and Alda covers a lot of material briskly and comprehensively. Whether you’ve been to Niceland, as she puts it, and are suffering from withdrawal, are planning on going and like to read extensively on the subject, or just interested in a good, entertaining, well-writing read, pick up a copy! – A. Garcia

A Marvelous Read from Beginning to End

A marvelous read from beginning to end, an absolute pleasure, Alda Sigmundsóttir’s “The Little Book of the Icelanders in the Old Days” is an hilarious and poignant tribute to her ancestors on that not-very-hospitable rock in the North Atlantic. While one can leap, goat-like, through the 50 mini `essays’ in any order, reading the book straight through provides a natural flow and ultimately a more moving experience than random browsing. Written in much the same chatty, personal style as her first Little Book of the Icelanders, this book had me chortling and snickering (somewhat to the dismay of my fellow travellers on the train) at almost every line for several chapters. The survival humour (of the sort that First Nations people in North America have) that served her ancestors is alive and well in Alda; it’s not so much *what* is said as *how* it is said.
The laughs continue, but gradually as one becomes more steeped in the past times (some not so very far past, as references to her grandmother attest) there is a subtle and moving change in one’s *experience* of what one is reading. There are plenty of memorable tid-bits, some funny, some sorrowful: odd superstitions, quirks of the language, the advantages of “badass survivor driftwood” from Siberia, the story of the man freezing to death in the open boat while his companions can do nothing to help him, but the whole is greater than the sum of its parts. The epilogue – which don’t try to skip ahead and read, read it when you’ve read the rest of the book – is a particularly effective piece of writing and a terrific rounding off of the journey one has been on while reading. – K.K. Wiley

Iceland in the old days…fascinating!

The little book is a great way to get a condensed history of the daily life of Icelanders. Fascinating bits, well-presented, but not belabored! Loved it! Shared it with family members. – P. Silver

The best of the Little Books……

I have read 4 of Sigmundsdottir’s Little Books and this one was my favorite. It was informative with some humor and very well written. – Reid1